Latest
You are at:Home»On Korea»Chicken party with Kimchi on the Side

Chicken party with Kimchi on the Side

Chuseok (추석) is near so I made plenty fresh kimchi for the coming feast. However, I also made some fried chicken to cheer up my roommate and friends.

Next week is 추석 (Chuseok) or simply put Korean thanksgiving. Chuseok, like Thanksgiving, is originally a day to celebrate the Autumn harvest. Nowadays it is a public holiday in Korea. Chuseok, however, is not just 1 day, it lasts 3 days in total and is celebrated on 5th day of the 8th month of the lunar calendar on the full moon. That of course means that the day(s) this Korean holiday is always different each year like Easter.

This year my Korean roommate and I have been invited by a Chinese friend to celebrate Chuseok (China has a similar tradition) with her family. As it would be quite rude to show up empty-handed, we decided to bring even more food to the table. We decided to bring gochujeon (고추전), hobakjeon (호박전), bindaetteok (빈대떡) and kimchi (김치).

The Onion in Kimchi

My roommate is an excellent cook. He can make some really delicious meals for me to enjoy, but in his fervor to promise delicious foods for Chuseok he forgot one important detail: He does not know how to make kimchi! Of course, I was more than willing to make the kimchi since I also need to make my contribution. So yesterday I spent half a day making a large amount of kimchi. 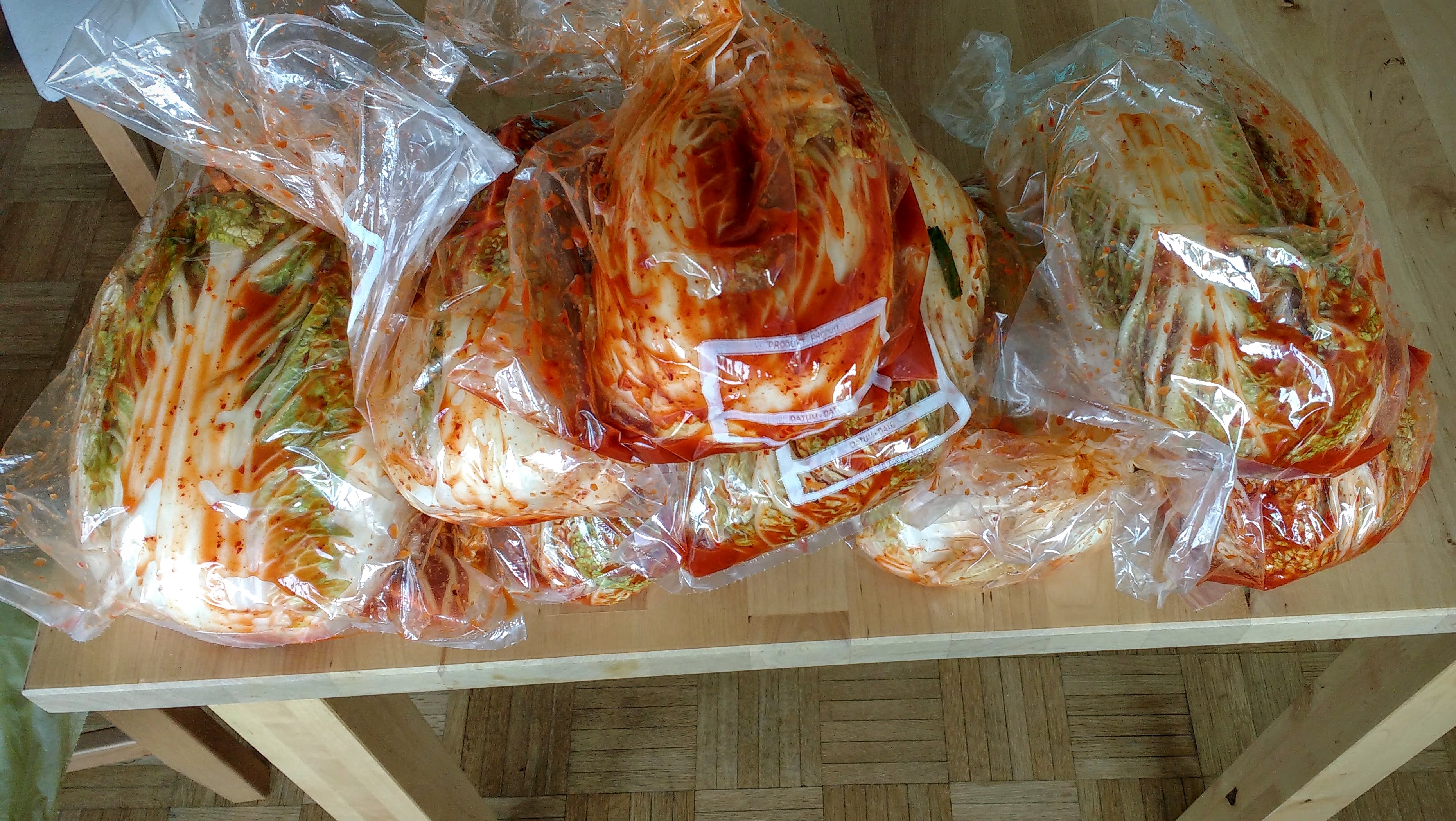 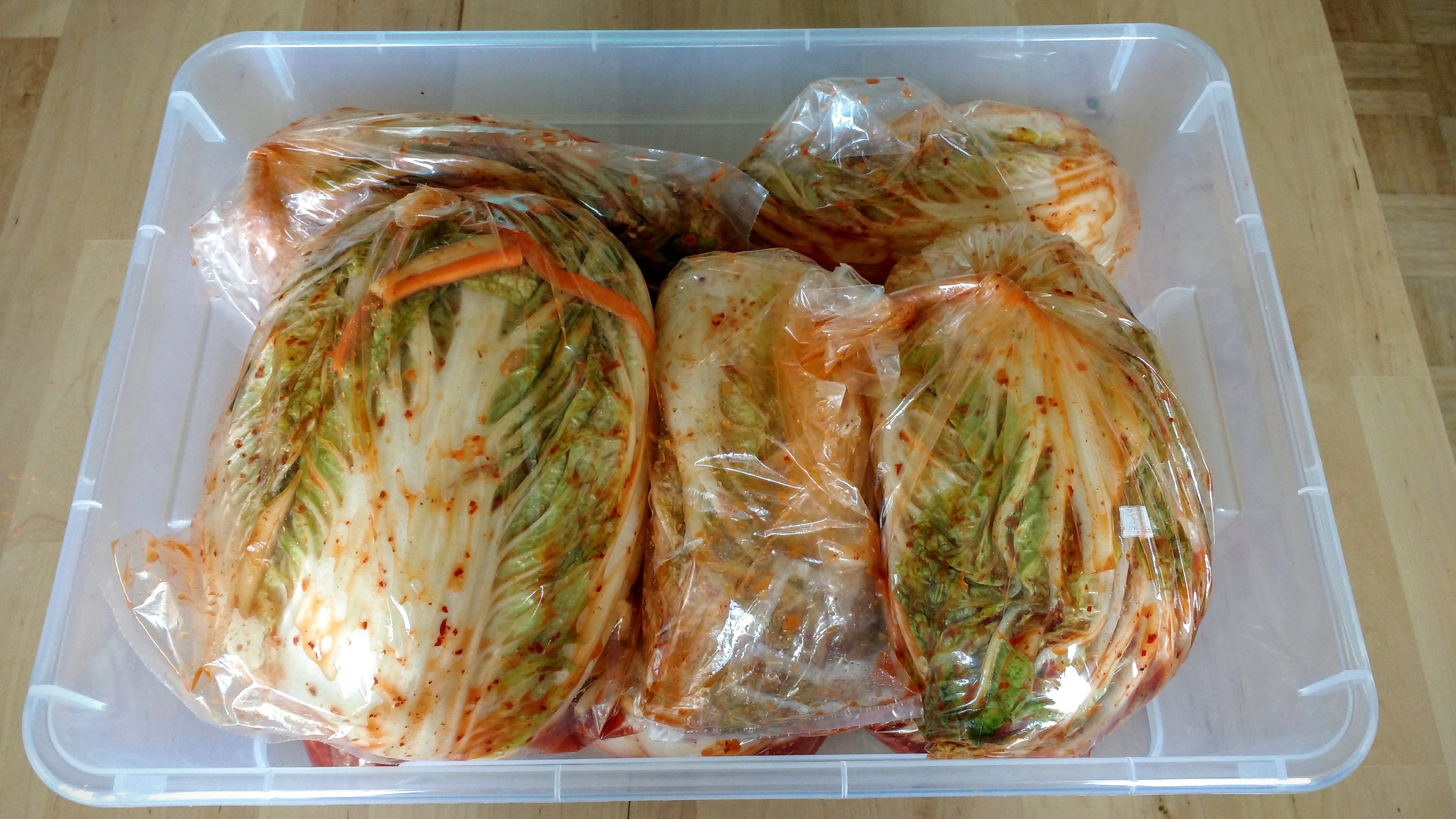 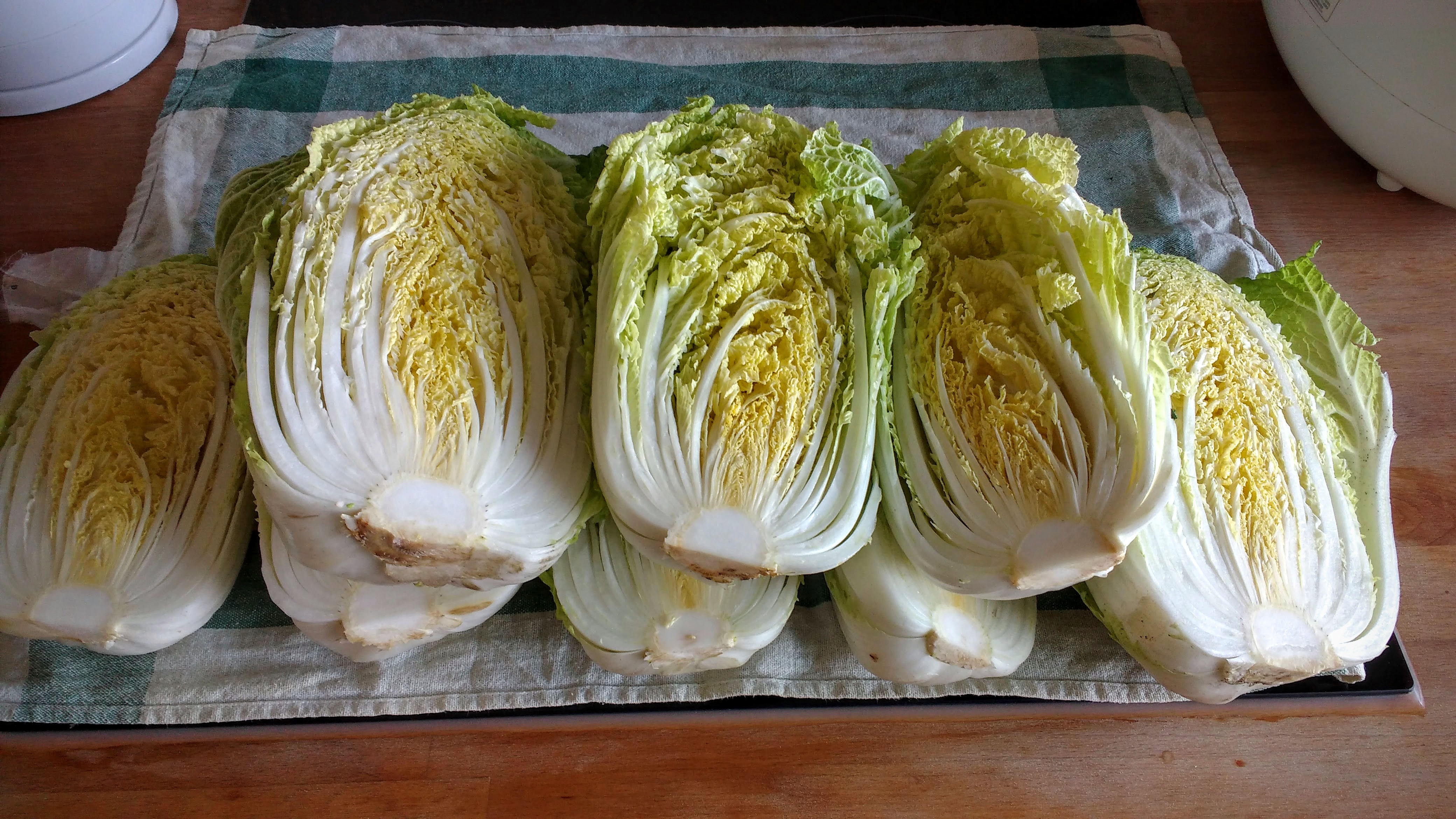 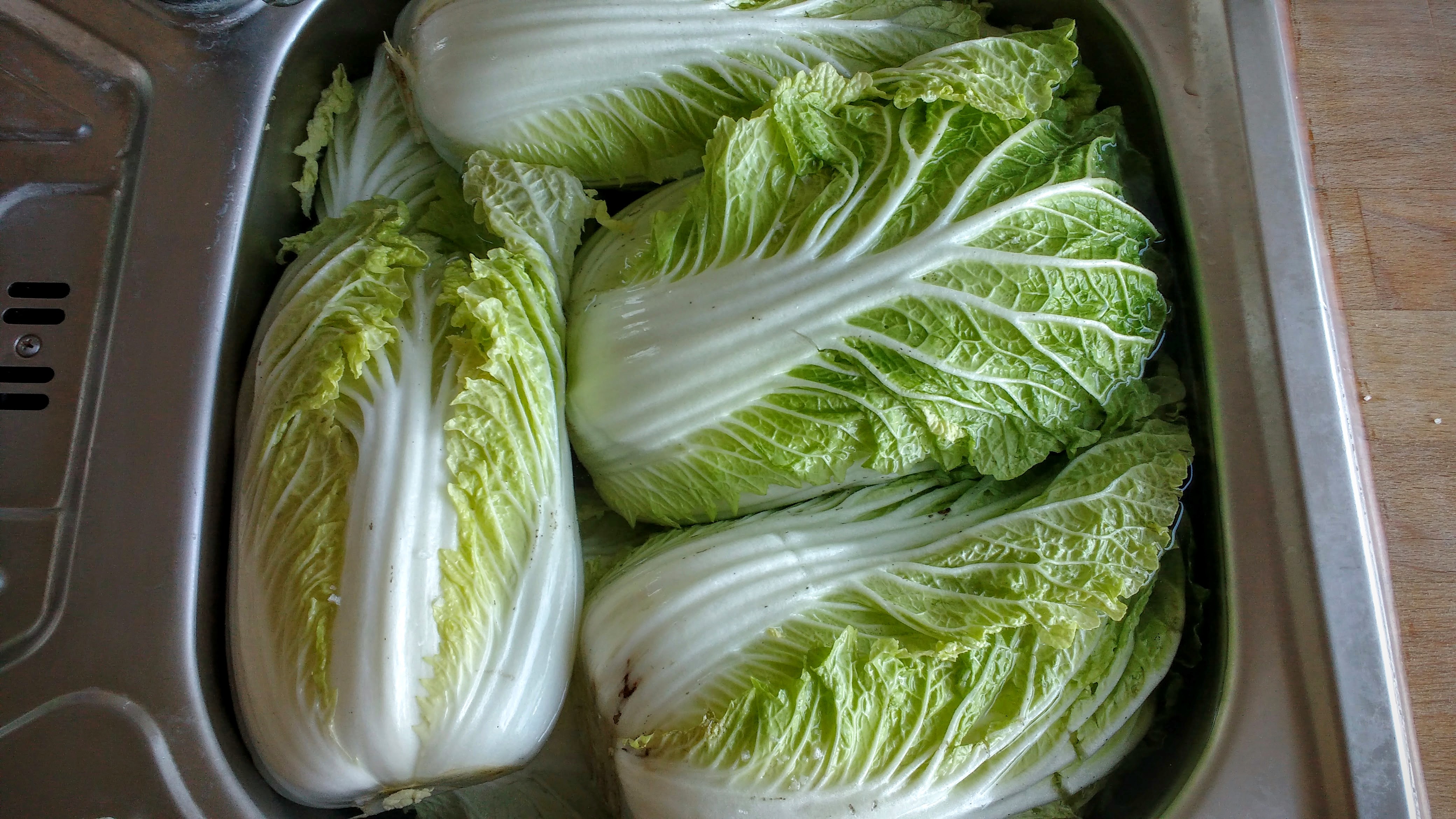 The salted cabbage is enjoying a few hours soaking in water. A veritable cabbage spa. 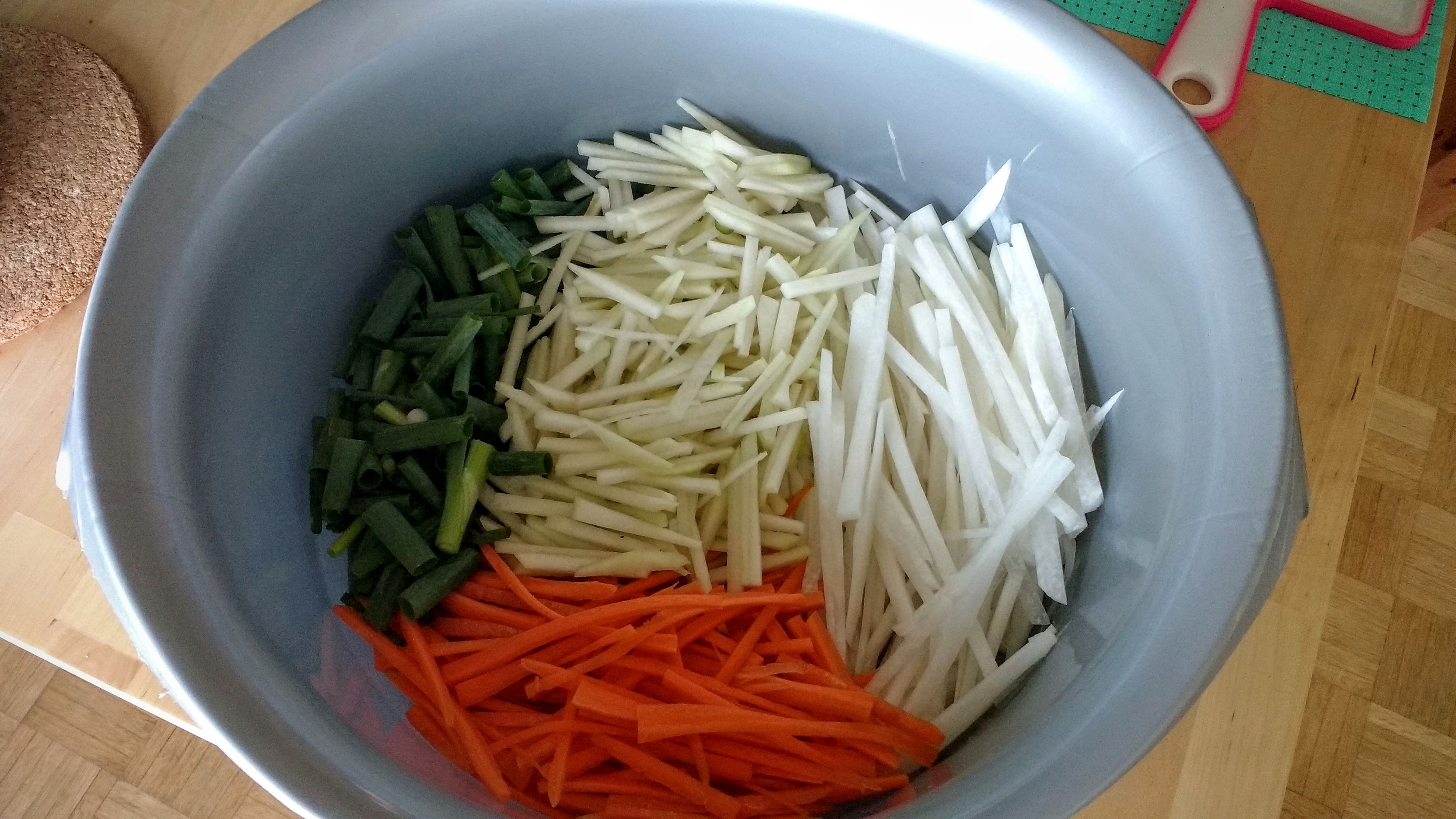 Sliced carrot, pear, spring onion and Korean radish for the kimchi. NO ONION!

I decided to make a lot of kimchi so I bought 4 cabbage heads turn into delicious kimchi. (Fun Korean tidbit: the Korean counting noun for nappa cabbage is 포기). While I was making the kimchi I was utterly surprised at some of the questions my Korean roommate asked me. One of the biggest shocks I got was when he asked me where the onion was for the kimchi mixture. To be fair, his family isn’t that into kimchi in the first place. It will shock some, but not all Koreans are kimchi addicts.

It took me half a day, but the result is a big box of kimchi ready to be consumed. This supply will last us a long time even though I will give away 2 bags as gifts: one goes to our Chinese friend and the other to our Taiwanese friend.

After making the kimchi, however, my day in the kitchen was not over yet. My Korean roommate and other Korean friends got the results of their exams. Let us just say it did not meet some of our expectations. So to cheer my roommate and our friends up we invited them over for some drinks and games. Furthermore I had a little surprise for them.

A few days ago I noticed a little promotion in our local supermarket 2 kilo chicken breast for the price of just 1 kilo! An opportunity I simply can NEVER ignore. The fates were surely smiling down on me because it gave me an idea. What would kind of food would cheer up any Korean? Korean Fried Chicken! So I decided to turn that 2 kilo chicken into a pile of delicious Korean Fried Chicken. 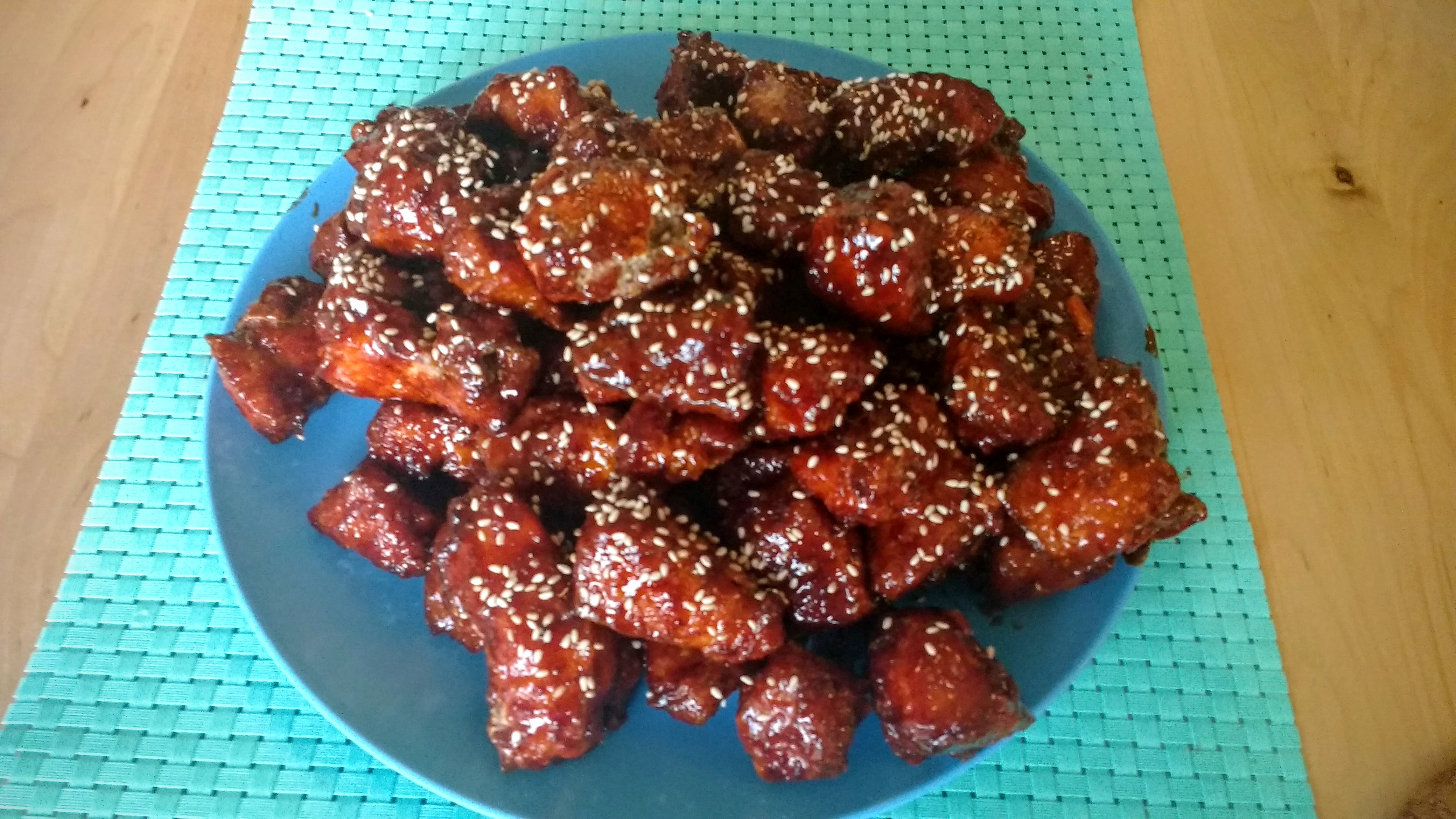 My Korean Fried Chicken for the party to enjoy.

It took a while, but the joyful sounds they made as they were eating my chicken made all my efforts well worth it. I also think that spending their time eating, drinking and playing games at our place really lifted their spirits. Food is a medicine; it is anti-depressant.

Anyway, they will get their fill at our place again soon enough. We had already planned to share nabe together at our place next week. So expect some food pictures then too!

She stole my Kitchen!

One of our Korean friends wanted to thank me for all my efforts and she just stands up and goes about stealing my kitchen! Suddenly someone else starts making food in my kitchen as if she owns the place. It was simply hilarious to behold.

The start of it all was when I asked her and our other friends if they knew what I could do with the Korean radishes I had left over. I had a lot of Korean radish in my refrigerator that I did not use for my kimchi. It seems she took that as her cue to start making something. Since I had all the ingredients, seeing as I made kimchi, she decided to turn all my radishes into kkakdugi (깍두기) and slice some into pieces ready to be turned into muguk (무국).

All I can say is thanks for your hard work and you are always welcome again!