Meokbang (먹방), the online eating show. Hugely popular in Korea and if you learn Korean difficult not to come in contact with. However, what is meokbang?

I like watching Let’s Plays. Those videos on YouTube of others playing a game. I like them when done by certain Youtubers. I also know that Let’s Pays are not everyone’s cup of tea. Through my Korean friends I was introduced to something quite different from Let’s Plays: meokbang (먹방), sometimes written as mokbang or even mukbang. If I were to describe what meokbang is than I would say that they are Let’s Eats.

Essentially, meokbang is nothing more than a person sitting in front of a webcam with a variety of food. He or she will then go ahead and eat all that food in front of a live audience with whom he or she will interact. I know this might seem weird or uninteresting if you read it like this. However, meokbang is a huge success in Korea, where several meokbang’ers manage to earn a living by simply eating.

Of course, if it were just eating in front of a webcam anyone can do it. Meokbang is more than just eating in front of a camera. Plenty meokbang’ers bring their own touch to the genre. Some of them will try to appeal to the audience by eating in a cute way. Others might appeal by doing various food challenges on demand. There are many different personalities out there and all of them bring their own flavor that appeals to a lot of different people. 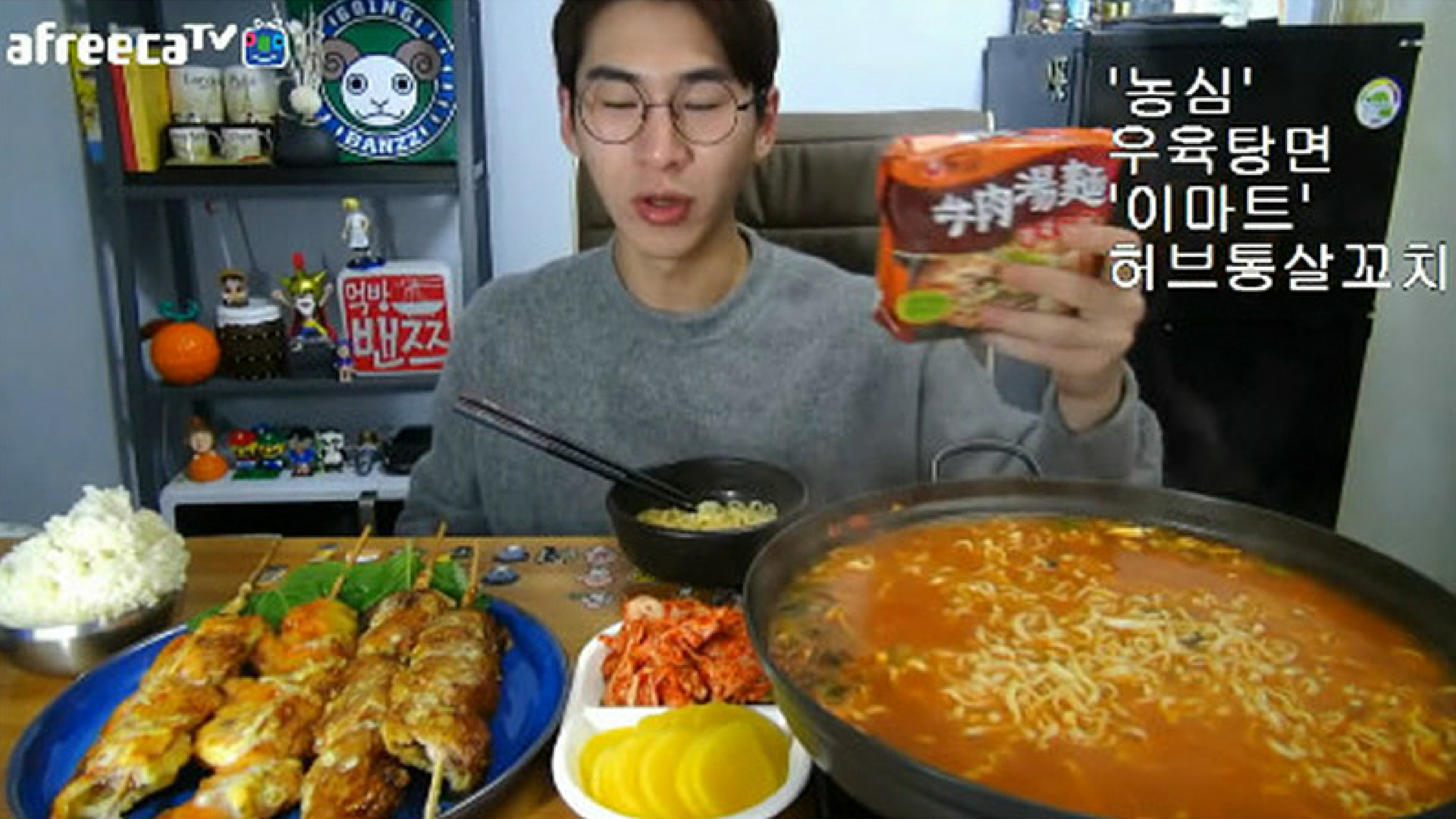 AfreecaTV is a popular source of meokbang webcasts.

Personally, I cannot see the appeal in meokbang, but I think that is mainly because I simply do not understand what the person is saying. Like Let’s Plays, meokbang is not mainly about the food, but about the person eating the food. My Korean friend says that through watching them he can still enjoy the food he cannot find in Belgium. I believe this is what they call ASMR or Autonomous sensory meridian response. Another one told me that he enjoys watching it while he is eating too. It makes him feel like he is eating with the meokbang’er.

Wether you are a meokbang’er or a blogger, you have a goal in mind: breaking even. To create content you often have to spend money. I spend money along with my Korean friends to write the reviews in Korean about businesses in Belgium, for example. Meokbang’ers, however, have to spend a lot of money each session as they need to buy sizeable amounts of food to consume in front of their audience. Luckily, as I mentioned, a few meokbang’ers managed to carve a professional career out of meokbang. So how do they support themselves?

The meokbang’er will mainly support him or herself on three main sources of income. The first income stream comes from viewer donations. Webcast platforms used by them such as AfreecaTV, allow viewers to send donations in the form of balloons. These donations while small can turn into a nice income source when many viewers donate during one session.

Another income source are advertisement deals. Some known meokbang’ers with a sizeable following are able to attract the attention of companies. These companies will support the meokbang’ers by providing them support in various forms. Food companies will provide smaller meokbang’ers with the food they can consume to increase brand awareness, which cuts their costs down for some video’s. However, larger stars will even get financial compensation for providing spotlight on products during their shows.

Lastly the most boring income source of all, of course, is ad revenue. This is, of course, self-explanatory. They often have websites with ads, they upload sessions to YouTube which they monetize through ads and so on. While many of us dislike ads, if we want to support the people on the internet we like, we need to accept some ads. It might as well be what keeps what you love afloat in the first place.

Interested in watching a meokbang yourself, but you do not know where to look? Well, me and my friends went to YouTube used our super, special, awesome Korean skills and searched for three well-known meokbang’ers. These people are accomplished meokbang’ers and might give you an idea of what Koreans like. Perhaps you might become one yourself one day.

Do you think meokbang is something strange or do you watch them regularly yourself? Let me know in the comments below, I would love to know what you think about this unique culture that is popular in Korea.