It is Chuseok (추석), a Korean lunar festival. Yesterday my friends and I celebrated it with a feast and playing a Korean card game: Go-Stop (고스톱).

It is a very important period in South-Korea right now a Yesterday, today and tomorrow it is Chuseok (추석). Chuseok is a lunar festival that is often referred to as the Korean Thanksgiving. It is a time when families gather and to honor their ancestors and simply make merry by eating until they burst. It is a pretty big deal in Korea.

You might have noticed how important Chuseok is on social media if you happen to follow Korean accounts. You  miss the countless posts wishing everyone a happy Chuseok (해피 추석). Companies, of course, cannot ignore such event and try to capitalize on it by spreading their own well wishes. Some of those well wishes are cute. Here is one of those well wishes by Visit Korea.

Anyway since I live with a Korean roommate Chuseok cannot pass unnoticed and we had plans as I mentioned in an earlier post after my exams. However, we had a slight problem: the husband of our Chinese friend became very sick right before Chuseok so we those plans got cancelled. Even worse: we already had done our groceries by then for Chuseok! We had so much food and no one to eat with! 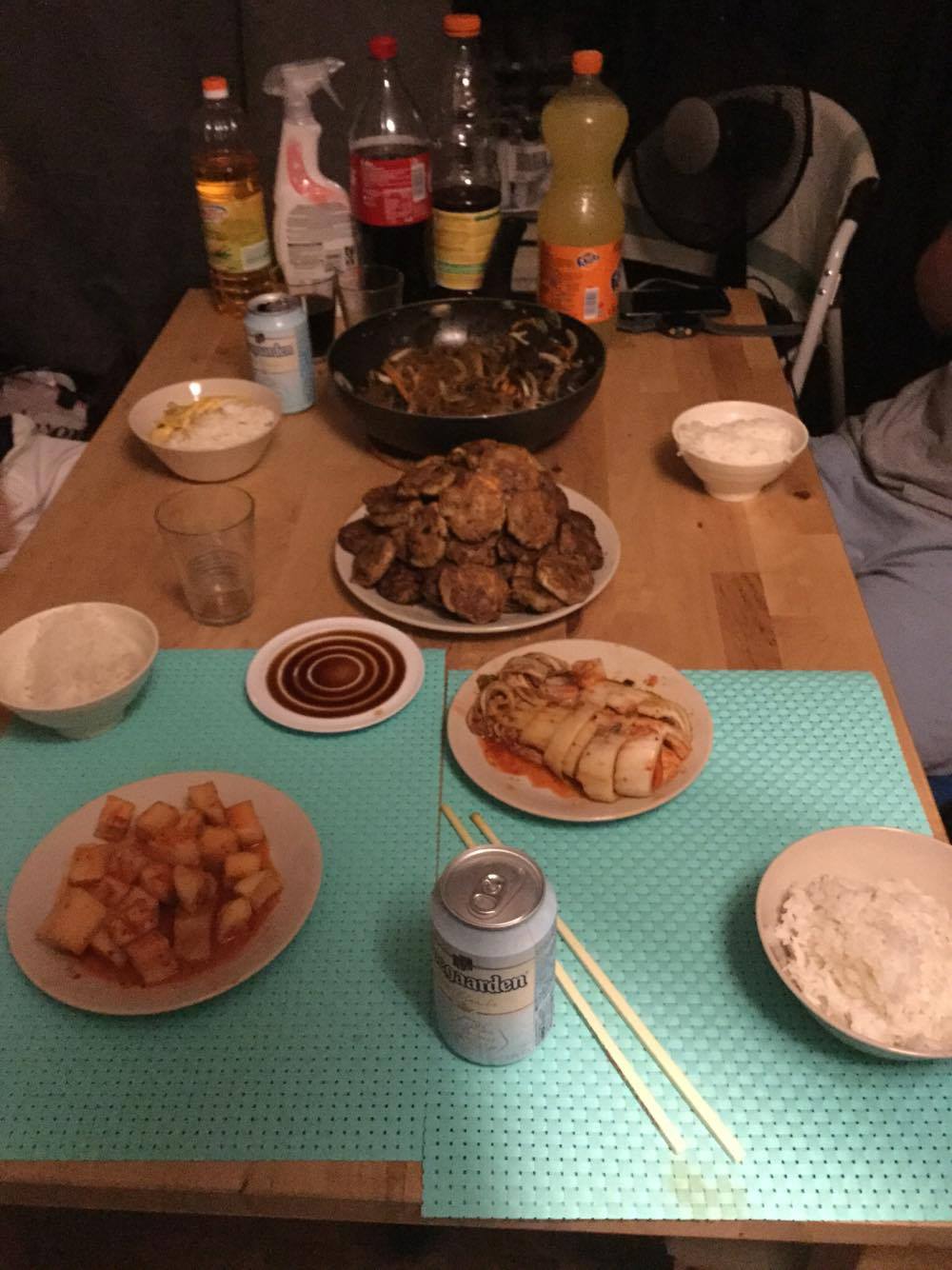 My first Chuseok meal; it does not look that pretty, but, hey, we are but students.

Luckily a solution came by pure coincidence. A couple of our Korean friends happened to call us to ask for some help with some issues they were facing. It seems living in Belgium as a foreigner isn’t easy, who knew? So we decided to just have those friends over to share the Chuseok meal with us! They brought drinks and we did the cooking together. It was a lot of fun, but it took a long time before we actually got to eating anything. We made so much! The japchae (잡채) and Korean flat meatballs (동그랑땡) were delicious… We had has much fun eating it as we had making it.

After dinner we enjoyed a nice conversation, but we decided to play a game together. The game they decided upon was a game often played during Chuseok and one that is very popular in Korea: Go-Stop! (고스톱). The game has many names one of them is Hwatu (화투), the name of the cards themselves. That name means ‘fighting flowers’ and gives you an indication what is on the cards. 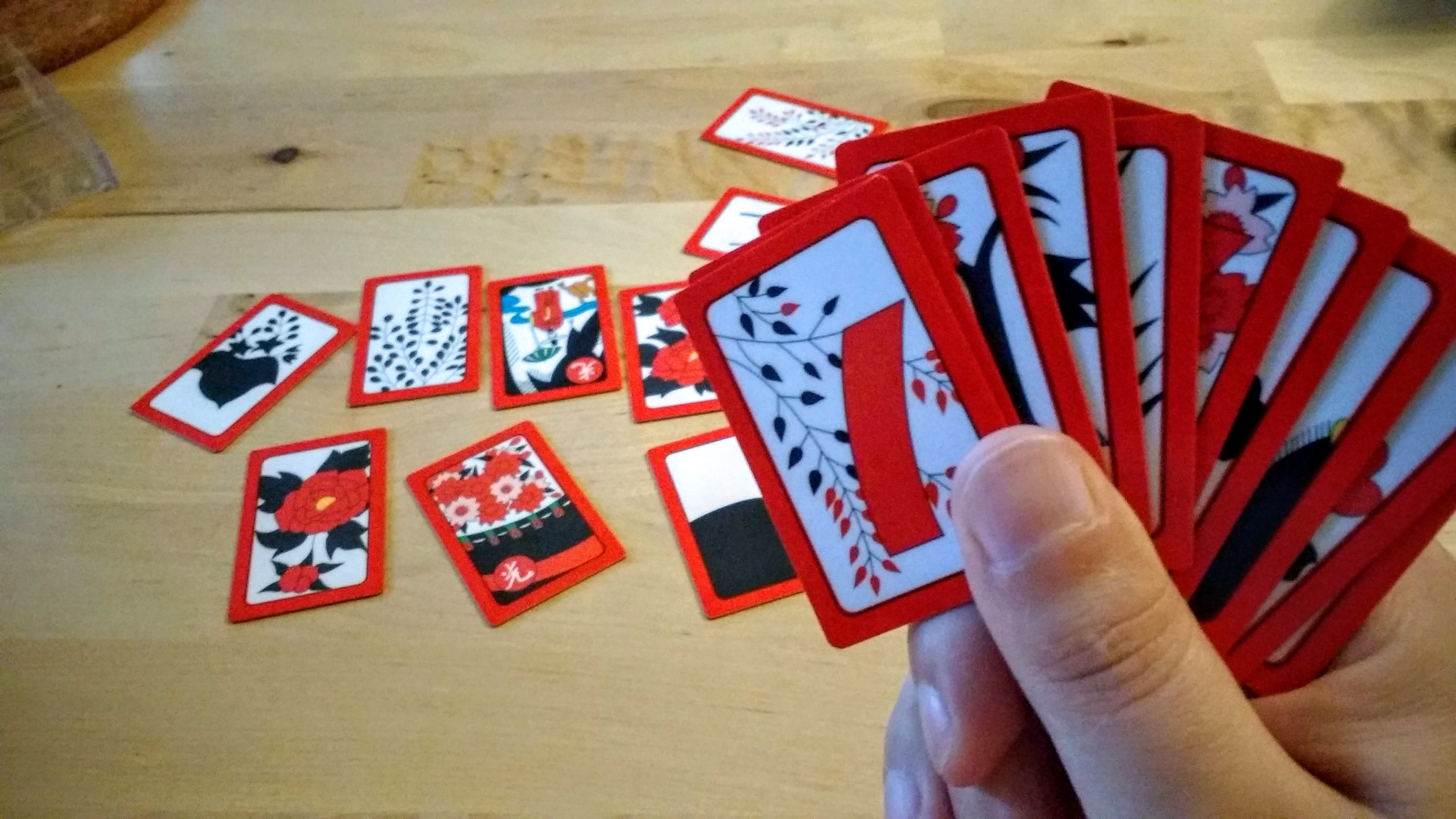 Playing Go-Stop! I think might have won that round.

I had never played the game before even though I have lived with a Korean for two years now. It is strange because my roommate actually owns a Go-Stop! card set. Anyway the game’s core mechanics are rather easy to memorize. (I might explain the game in a later post) so we could play for real fast. I think we played for two hours, maybe longer. It was fun, especially, since those Korean friends are crazy (not at all like me!).

Have you ever celebrated Chuseok with a Korean friend? I really want to know about your experiences since my Chuseok was a bit improv rather than a full traditional Chuseok.

PS: This is a more traditional table for Chuseok. Mind you this is the table for the ancestors.